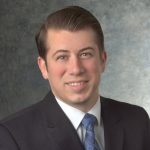 Peter O’Grady joined Kaman & Cusimano in November of 2017 and is a key part of the collections department.  He brings an extensive knowledge of the bankruptcy field to the Firm, as he previously represented mortgage and automobile lenders in bankruptcies.  Peter is a 2015 graduate of Cleveland-Marshall College of Law and a 2011 graduate of Cleveland State University.  Peter is licensed in all Ohio State Courts as well as the United States Northern and Southern Districts of Ohio and the Sixth Circuit Court of Appeals.

Peter previously lived in a condominium association and currently lives in a homeowner’s association.  As a result, Peter has a personal understanding of the challenges that community associations face.  Peter is also a United States Air Force Veteran having served as an enlisted fire fighter from 2002 to 2006.